You may have been able to tell from my last post that I was feeling somewhat down, which is not like me let me tell you. Well I'm pleased to report that I have my positivity back in abundance after confirmation from two customers that they would like to site our vending units this week.

Combine this with some excellent work from Silvano to slash our overheads and buy us the 3-6 months that we need to make this business work and maybe you can see why my optimism is back with a vengeance.

I can't describe the confidence this has injected back into not only myself but everyone involved with our business. In fact I've been inspired enough to launch another PR project with our resident spin doctor Paddy Doyle who has done some excellent work for us including our article in the Yorkshire Evening Post and video endorsement from galaxy radio:

Yes, we're going after more coverage but this time we've set our sights on local television news. It's early days and Paddy and I have still to figure out the angle we're going to attack from but watch this space and you may be seeing us on Calendar News sooner rather than later.

It's good to be back!! Please slap me if I ever start moaning again.
Posted by Jake Dyson at 18:27 No comments:

For the first time since we embarked on our mission to start Soupa, I've had serious doubts about our ability to pull it off. It's been a long, stressful and frustrating path since the inception of the concept during Christmas 2006 with many twists and turns keeping success from our sights.

In the time since then, we've had highs and lows a plenty. I cannot understate the emotional rollercoaster that we have put ourselves through. On a number of occasions the mood within the team has changed from pure euphoria to abject terror in the space of only an afternoon.

In fact if there is one thing I've learned it's that you must be able to take the rough with smooth. For example, after 6 weeks of hard work performing the Soupa Size Me challenge we were overwhelmed with the news that the subject had lost 5% of her body fat and that the Yorkshire Evening Post were so interested that they were to run a half page colour editorial about the results and our story.

However, the joy was short lived when it became clear that we were to receive not a single call of interest from the article and that the website we had painstakingly built would receive a couple of extra hits at best. I really feel sorry for companies that pay for advertising space in the paper to achieve these results and shudder to think at how much the coverage we received would have cost to buy.

Or take the whole Leeds University Union fiasco. We were over the moon when the director of Leeds University Students Union agreed to us placing a trolley unit in the Union building, which we spent months developing to be told at the last moment "that we have decided to find a soup manufacturer and do it ourselves". Another crushing blow.

For all the highs that we have achieved there seems to be equally crushing blows to follow but as they say, that's business - nobody said it would be easy. With no retail unit to fall back on we've been forced to rely on our office delivery business, which is taking off slower than expected and may yet deliver us our final, killer blow.

I'm now in charge of Sales, so the pressure is firmly on my shoulders to deliver and you can be sure that I will give it every ounce of my being but I can't help but think about the grey future that lies ahead if I fail...
Posted by Jake Dyson at 17:24 No comments: 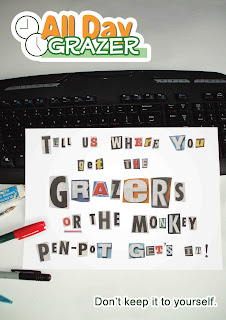 Recently I was designing the flyers for our All Day Grazer delivered healthy food pack. Initially I designed the front which compares what products you could get from our competitors with the constituents of our product. This can be found on the website through the following link, with the menu and the back of the flyer.

The back of the flyer has a description about grazing and the benefits to the consumer of eating in this manner. However, I was originally going to use the poison pen letter concept that is attached to this post. The concept was scrapped after feedback from a few people that they didn't get the idea behind the advert.

It's very easy to get too close to a design and lose sight of the initial impact of the piece on the viewer. I've found this to be the trickiest part to design - making the idea so loud and clear that anyone can get it.

The idea is that somebody (person X) has come back to their desk to find a poison pen letter from their colleagues, who are jealous that person X is keeping the source of the All Day Grazers to themselves. This is meant to be a jokey reflection of office politics and based on the insight that women in particular are jealous of other women who are eating healthily. We discovered this phenomenon when we trialled All Day Grazer with a female city centre office worker.

I chose "Monkey Pen-Pot" as an item that the jealous colleagues had stolen from person X's desk as a ransome and have since decided that "comedy pen-pot" is a bit clearer although I'm trying to think of an item that would make the idea even clearer - any suggestions?

Since putting the ad together I decided that it would be clearer if the shot was retaken and looked more like the notice had been stuck to person X's screen and also that in fact it would be better to give person X a name, so the note reads "Rachel, tell us where you get...". This is because the people who have seen the ad think that it speaks directly to them and so confuses the concept.

Does anyone have any ideas what I could do to communicate the idea in a clearer way? What are your reactions to the ad? That is, do you get it in anyway or is this a lost cause? I love the idea and think I could make an interesting campaign out of it but I'm really struggling with the execution.

Nothing in life has interested me so much as the peculiar 'magic' that makes some things work and some things not. As a child I was no end of frustration to my ever patient mother because I had to find out how things work. Picture the scene on Christmas Day of a brand new electronic toy completely dismantled and laid out on the floor and you are someway to understanding her frustration.

Cut to the present and I'm still doing the same, only the goalposts have moved some considerable distance since then. No longer am I playing with Lego and Meccano but my very own business along with my partners Joe and Silvano. In light of this my quest is to understand the reason why some products and services resonate so strongly with their customers and become household names in a very short space of time whilst others flounder and fail.

My studies of maths taught me that everything starts with a definition so let's take a look at a couple (Cambridge Online Dictionary):

There are a many spectacular examples of each in the news nearly everyday but one success story that lives in my mind is the launch of the Arctic Monkeys. The band was catapulted to super stardom with their number 1 hit "I bet you look good on the dancefloor" with no money spent on marketing or advertising. It is no secret that MySpace was pivotal to the bands success but what may surprise you is that they didn't even know what MySpace was and their fans set it up! Check out the band's page on Wikipedia for more info:

Wikipedia History of the Arctic Monkeys

Perhaps the most spectacular business failure in recent memory is the fate of Barings Bank, not simply because of the scale of the disaster but the nature of the business that was brought under. Barings was the oldest merchant bank in until one man caused it to go bust in 1995. The repeated failures of Nick Leeson brought the bank to its knees, who lost £827m over the course of three years and caused a major shift in the history and methods of banking.

In this blog I aim to begin to understand what are the common denominators behind both boom and bust, so that I can avoid the latter and hopefully embrace the former in my own business activities. I will also give an account of the challenges that I face in life because a topic such as this must cover all areas of human experience. Hence the scope of the content covered within this blog is not limited in anyway and I take the opportunity to encourage my readers to post their thoughts on the topics, no matter how trivial they might seem to be.

So I pose the question "Boom or Bust?" and hope my mother's suffering was not in vein!

Jake Dyson
Leeds, United Kingdom
I'm 24 and just starting out in business with my company Soupa.

Have you stuck to your New Year's resolutions?